Management and Visualisation of Non-linear History of Polygonal 3D Models

Management and Visualisation of Non-linear History of Polygonal 3D Models

Abstract
The research presented in this thesis concerns the problems of maintenance and revision control of large-scale three dimensional (3D) models over the Internet. As the models grow in size and the authoring tools grow in complexity, standard approaches to collaborative asset development become impractical. The prevalent paradigm of sharing files on a filesystem poses serious risks with regards, but not limited to, ensuring consistency and concurrency of multi-user 3D editing. Although modifications might be tracked manually using naming conventions or automatically in a version control system (VCS), understanding the provenance of a large 3D dataset is hard due to revision metadata not being associated with the underlying scene structures. Some tools and protocols enable seamless synchronisation of file and directory changes in remote locations. However, the existing web-based technologies are not yet fully exploiting the modern design patters for access to and management of alternative shared resources online.
Therefore, four distinct but highly interconnected conceptual tools are explored. The first is the organisation of 3D assets within recent document-oriented No Structured Query Language (NoSQL) databases. These “schemaless” databases, unlike their relational counterparts, do not represent data in rigid table structures. Instead, they rely on polymorphic documents composed of key-value pairs that are much better suited to the diverse nature of 3D assets. Hence, a domain-specific non-linear revision control system 3D Repo is built around a NoSQL database to enable asynchronous editing similar to traditional VCSs. The second concept is that of visual 3D differencing and merging. The accompanying 3D Diff tool supports interactive conflict resolution at the level of scene graph nodes that are de facto the delta changes stored in the repository. The third is the utilisation of HyperText Transfer Protocol (HTTP) for the purposes of 3D data management. The XML3DRepo daemon application exposes the contents of the repository and the version control logic in a Representational State Transfer (REST) style of architecture. At the same time, it manifests the effects of various 3D encoding strategies on the file sizes and download times in modern web browsers. The fourth and final concept is the reverse-engineering of an editing history. Even if the models are being version controlled, the extracted provenance is limited to additions, deletions and modifications. The 3D Timeline tool, therefore, implies a plausible history of common modelling operations such as duplications, transformations, etc. Given a collection of 3D models, it estimates a part-based correspondence and visualises it in a temporal flow.
The prototype tools developed as part of the research were evaluated in pilot user studies that suggest they are usable by the end users and well suited to their respective tasks. Together, the results constitute a novel framework that demonstrates the feasibility of a domain-specific 3D version control. 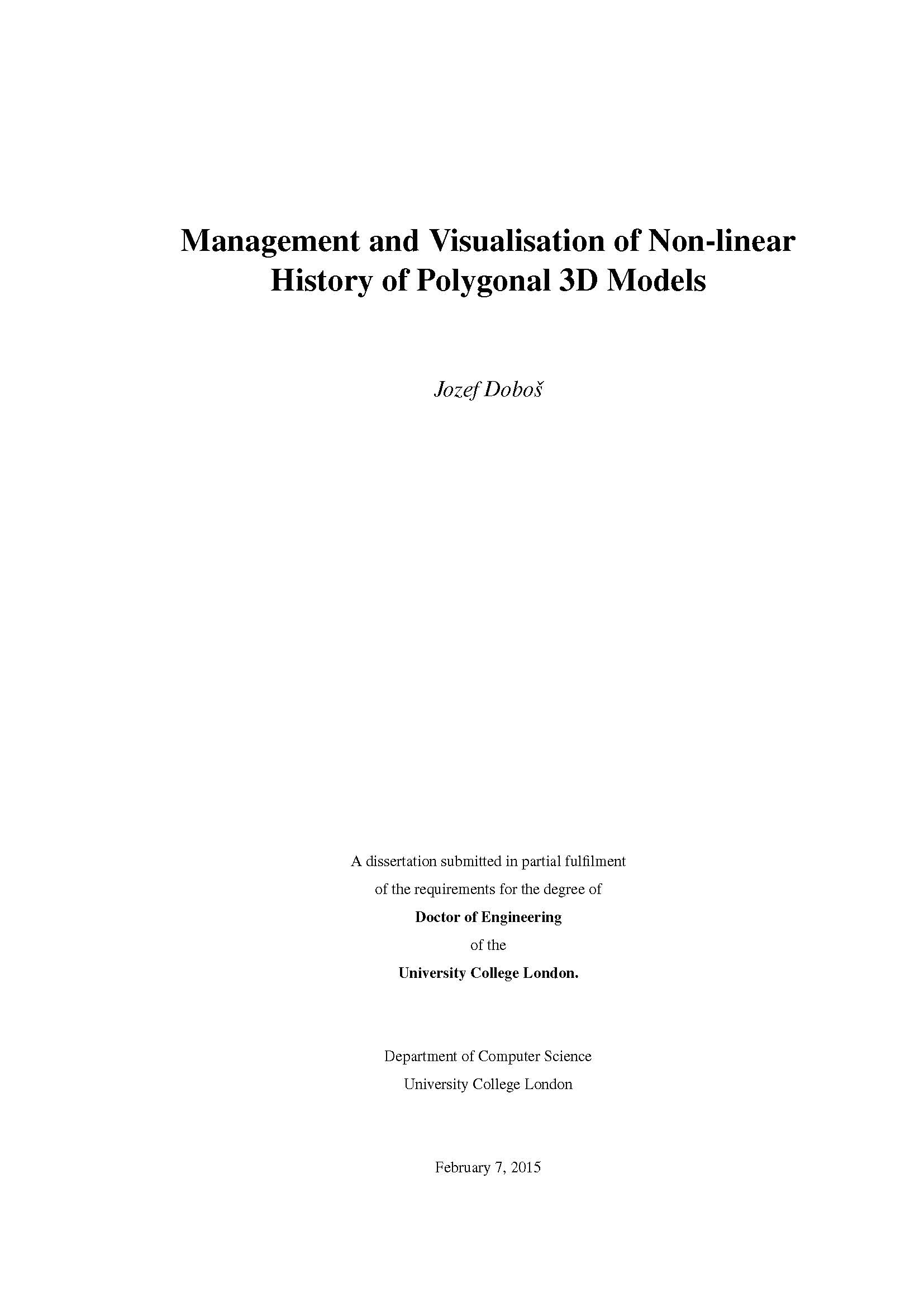