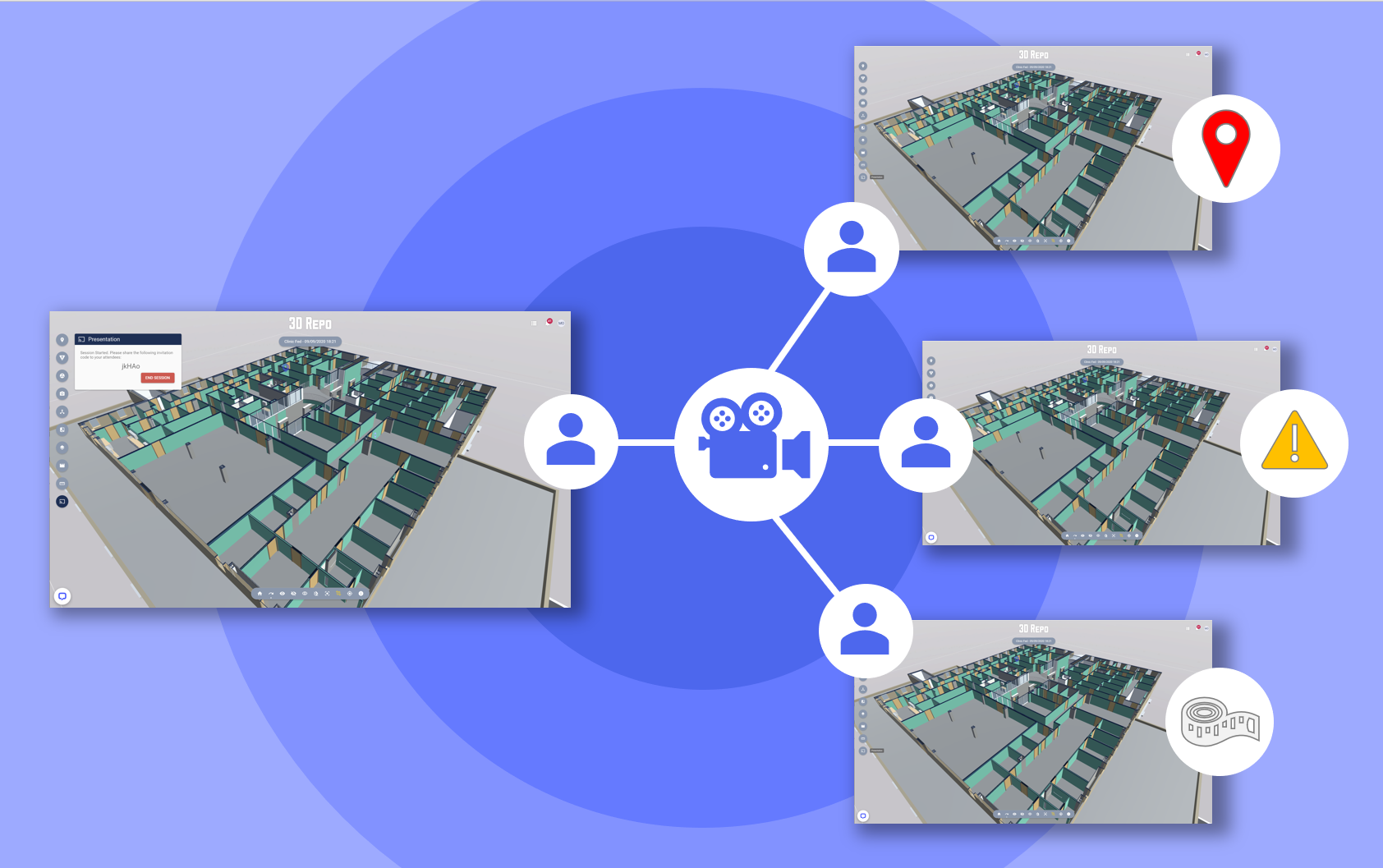 Due to the COVID-19 pandemic, many construction projects stopped working on sites altogether while those that did remain open asked all non-essential staff to work from home. The subsequent lockdowns uncovered new problems for remote working and BIM coordination, with choppy audio and video during teleconferencing becoming the new norm for many people working from home. Adding in tasks such as 3D rendering made screen sharing near impossible for many AEC professionals. The combined load of 3D rendering with screen sharing can cause serious connectivity issues resulting in jittering, loss of audio and eventual network throttling at both the sending and receiving end.

Leveraging our existing cloud-based digital construction platform, the team at 3D Repo developed a novel remote collaboration rendering solution which in combination with advanced caching can significantly reduce the bandwidth and latency requirements during teleconferencing when collaborating on large 3D BIM models. Now, multiple users can collaborate on a shared model driven by a single presenter.

To illustrate the benefits of the presenter mode, we’ll show an example using the B3 federation of structural and MEP 3D models from the Canary Wharf – Wood Wharf New District Development project as shown in the image below. 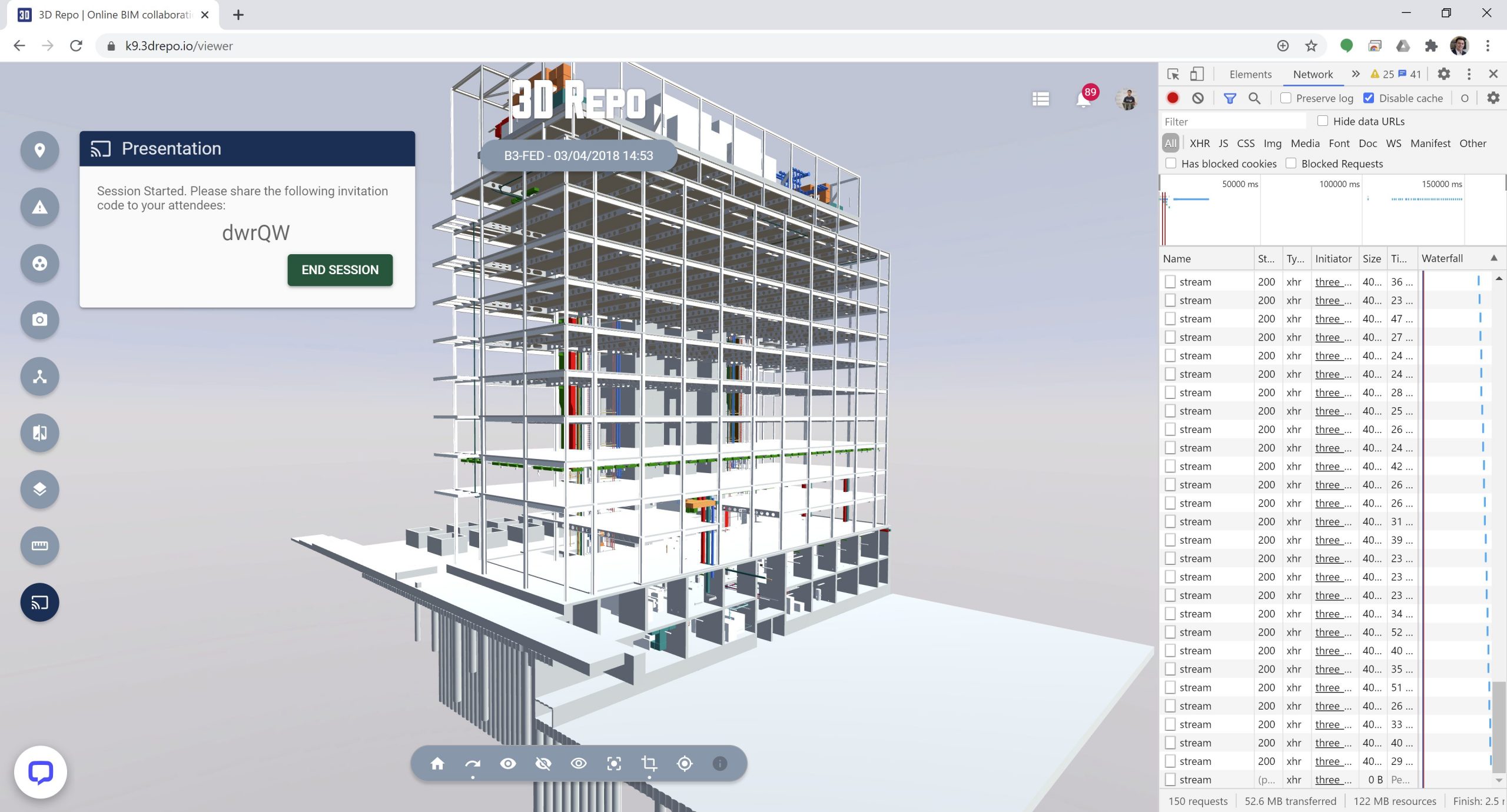 Using MS Teams, the graph below shows a comparison of Bytes/second during a 60-minute telco for sound + 3D Repo versus sound + screen sharing. Even though the first three minutes of the teleconferencing session are taken up by loading the 3D BIM assets when using 3D Repo, their network load and therefore transmission is still considerably lower in comparison to the sustained screen sharing. Over the 60 minute teleconference, the amount of data transmitted is two orders of magnitude lower with 3D Repo in comparison to screen sharing – to prove the efficiency of the new solution by 3D Repo. 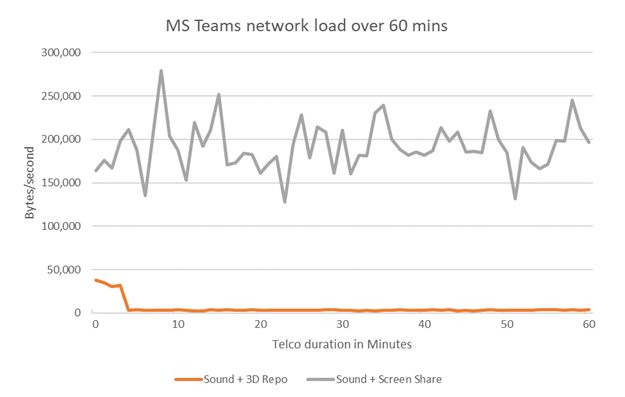 As the presenter navigates the model, the attendee’s camera automatically follows along. Section planes, colour overrides, and element visibility are also mimicked across all participants. Better still, every participant has access to the full suite of 3D Repo tools to report any design-related issues, highlight health and safety risks via SafetiBase, or query the model using our BIM data and measurement tools. At any point, attendees can also diverge from the presenter’s control to perform other ad hoc tasks and later easily re-join the presentation when they choose to do so.

The new solution by 3D Repo relies on remote 3D rendering and navigation sharing which performs at a fraction of the bandwidth normally required for such tasks. On top of that, allowing attendees to raise issues along the way directly in the 3D model will reduce the often lengthy actions list that arises from such meetings.