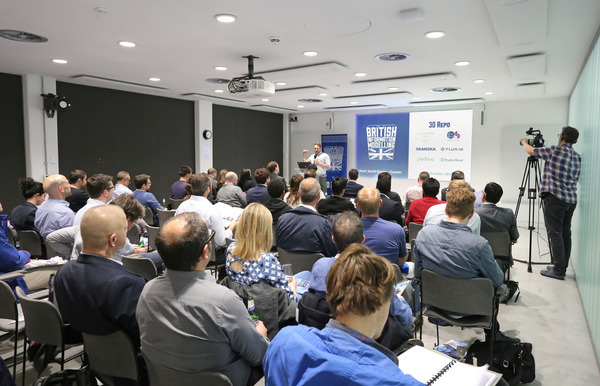 London, 17 October 2017 – The annual Digital Construction Week kicked off on Monday 16 October with a packed  British Information Modelling event held at the Geovation Hub in central London.  The fourth in a series of bi-annual events organised by 3D Repo, speakers from Bryden Wood, Skanska, Flux, Ordnance Survey and Podaris took up a geospatial theme with delegates debating issues such as data access, integration and collaboration.

Skanska’s Vaibhav Tyagi talked about its lead in the Innovate UK government backed project to provide integration between geospatial and BIM data.  Elite Sher of Bryden Wood was then joined by 3D Repo’s Pavol Knapo to present their developments in 4D sequence visualisation on 3D Repo’s cloud-based digital construction platform.

Layla Gordon of Ordnance Survey took to the stage to explain pioneering R&D work linking Augmented Reality (AR) to GIS data, showing examples of AR at both city and internal building levels. Anthony Buckley-Thorp of Flux then presented a solution for easy access to contextual data for design and planning purposes. The event was rounded off with a talk from Nathan Koren of Podaris, who discussed the long lead times affecting infrastructure projects and presented a solution designed to free data held in data silos and speed decision making.

For the second year running 3D Repo has arranged British Information Modelling in coordination with Digital Construction Week (DCW) which takes place this week at London’s Excel (18-19 October 2017). As the pioneer of cloud based design collaboration in BIM, 3D Repo will be on stand C49 and D43 exhibiting its latest developments including Virtual Reality and 4D modelling applications.

“This is the fourth British Information Modelling event held over a 2 year period and it is remarkable to witness the speed of technological innovation in the construction and infrastructure sectors,” commented 3D Repo’s CEO Dr Jozef Dobos. “With so much data being created the focus now is finding ways to make best use of it.  As a provider of an open platform designed to ease collaboration, it was encouraging to see how the industry and technology suppliers are working together to open up and share data, with innovations that make data simpler to visualise and understand.”

Contacts:
Enquiries to Pavol Knapo at 3D Repo at pavol.knapo@3drepo.org

With 3D Repo, users can then manage model revisions and highlight potential issues using live collaboration tools, which allow the whole project team to work from a single source of truth. More than 40 different 3D file formats are decomposed and federated in the company’s big data repository. Additionally the project knowledge base can be accessed via VR giving a live experience which has applications in Health and Safety training and client experiences.

The 3D Repo team has collaborated on a number of large scale projects with companies such as ARUP, Balfour Beatty, Skanska, Crossrail and Canary Wharf. https://3drepo.com/