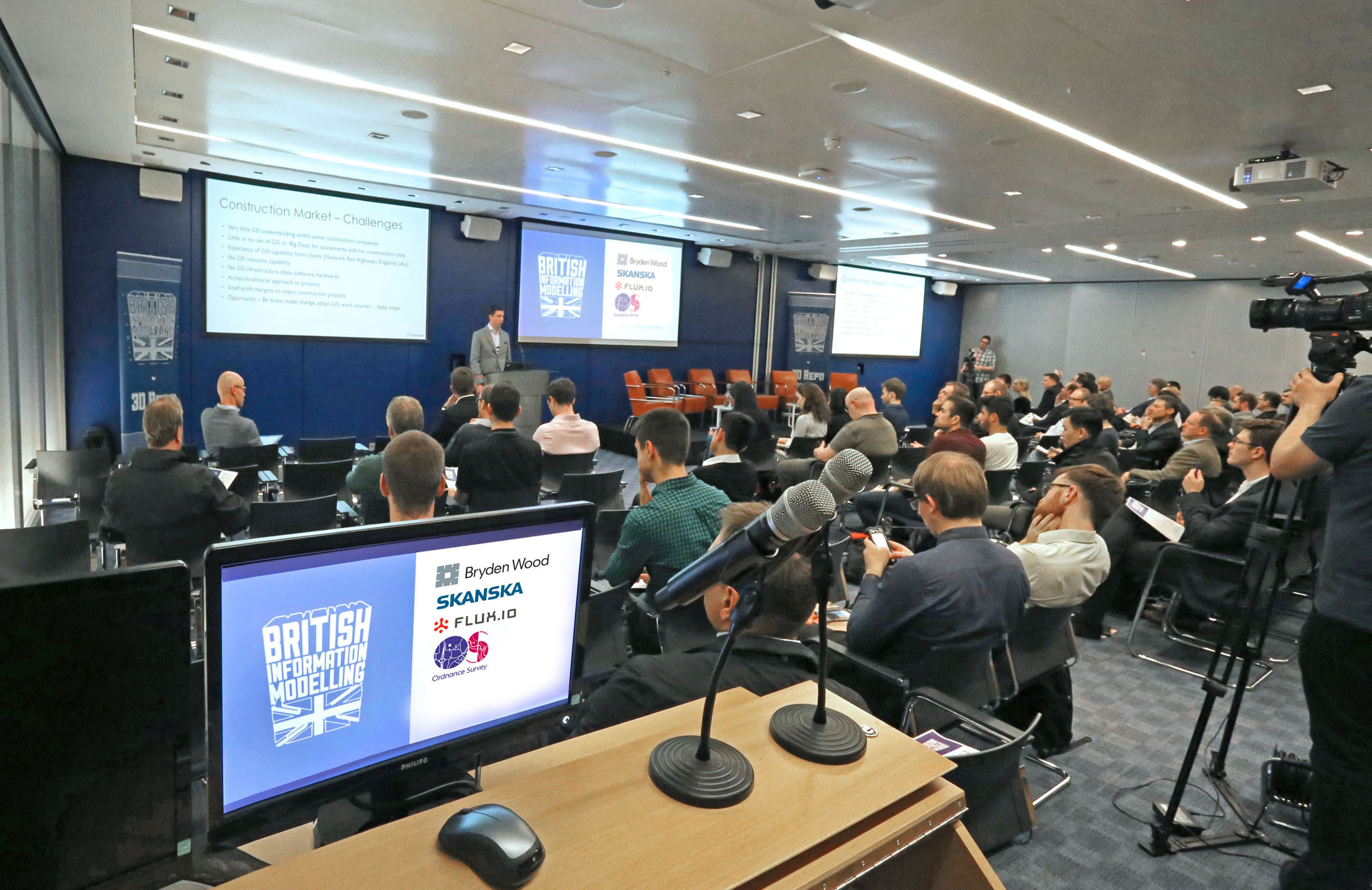 London, 02 October 2017 – Representatives from Bryden Wood, Skanska, Flux.io, Ordnance Survey, and 3D Repo will headline at British Information Modelling, the fourth in a series of technology events that kicks off this year’s Digital Construction Week.  Bringing together innovators and experts from across the Building Information Modelling (BIM) sector, the evening seminar and networking event, hosted by Geovation at its London Hub, will take place on 16 October 2017.

The free to attend British Information Modelling seminar will coincide with the start of proceedings for the annual Digital Construction Week (DCW) event series, which includes a two-day exhibition, hands on demonstrations and workshops, classes, networking events and a thought leadership conference.

Flux.io will be showcasing its unique approach to collaboration via the cloud. There will also be an overview of the Innovate UK funded project ‘VISUALISE’ by Skanska in collaboration with 3D Repo, which aims to combine the worlds of BIM and Geographical Information Systems (GIS), using modern techniques such as WebGL, VR and AR (Augmented Reality). The event will also feature talks on the latest innovation for the industry from Ordnance Survey, and more speakers will be announced in the forthcoming days.

“It is a real honour to welcome some of the best known names from the sector to the fourth British Modelling Event,” commented 3D Repo’s CEO Dr Jozef Dobos.  ”The combination of thought leaders, policy makers, innovators and front-line practitioners make this seminar unmissable for anyone involved in construction and infrastructure or with an interest in BIM.”

British Information Modelling takes place from 18h30 to 21h00 on 16 October 2017 at the Geovation Hub: London’s Digital District Data, Sekforde Street, London.  Host Geovation is Ordnance Survey’s  commitment to open innovation, and is how it creates new models to work with other companies and organisations outside the business.

The event is free to attend and places will be offered to qualifying professionals on a first come first served basis.

Further details including a full speaker line up and joining instructions are available at https://3drepo.com/registration-for-4th-british-information-modelling-by-3d-repo-now-open/

With 3D Repo, users can then manage model revisions and highlight potential issues using live collaboration tools, which allow the whole project team to work from a single source of truth. More than 40 different 3D file formats are decomposed and federated in the company’s big data repository. Additionally the project knowledge base can be accessed via VR giving a live experience which has applications in Health and Safety training and client experiences.

The 3D Repo team has collaborated on a number of large scale projects with companies such as ARUP, Balfour Beatty, Skanska, Crossrail and Canary Wharf. https://3drepo.com/